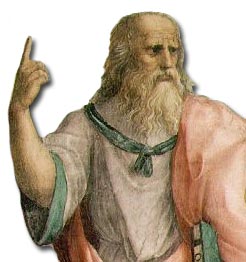 I think he was very close to the two basic ideas. In fact he considers them, although he does so through the conception of Man and his circumstances that he had. For Plato, the subject was the State. A collective subject that was the personification of Man. The Socratic Greeks still did not conceive larger collectives than their city-states. And even Plato's State, besides being ideal, was too advanced for his time.

But the concept is valid. The State of Plato represents current humanity. It is the complex group composed in turn by several groups forming an active and beneficiary entity. A system: a construct would be called now.

The two basic ideas are in Plato if we adapt the concepts to his time: his goal was the survival and well-being of the group he was a member of: his State, which today would be equivalent to Humanity. And the strategy for trying to achieve these objectives was the one he considered the most effective and efficient: coexistence. For this, among other virtues, justice is prioritized with a meaning that is equivalent to our extended altruism: that each one does what he has to do and fulfills the function that corresponds to him. That is, to be altruistic, materially and morally rewarded, and contribute to society hes's doing and virtues.

Plato does not see that these two obligations are already inscribed in all men. And like all other philosophers up to now, he wants to base ethics on reason. Needless. The reason allows to discover the already existing basic laws, physical and biological. But we can not invent them nor can we change them. Logically, they are prior to us. And for them we are here. We can and must use them and adapt them. And dictate the contingent and conjunctural regulations. But we can not invent or change the principles of our "Constituent Law". At least for the moment.