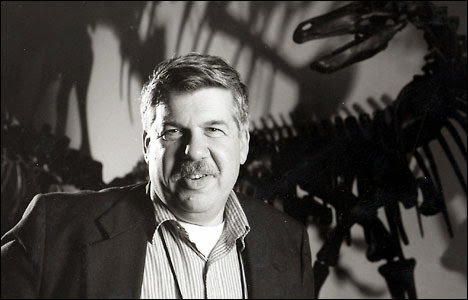 To lighten something this tome I copy the beginning of my first note on Gould (Corral: 2015, 251):

"It's 9:59 on the morning of 18.7.2015. On the terrace of the small house in Marbella, facing the beach. It is a radiant day. At dawn I tried to fish some sea bass with artificial lure but it is no longer time. Since April, even at these early hours they do not approach the shore. Better for them.

And now I feel with morality to give a brief account of the first 195 pages of "The structure of the theory of evolution", an almost posthumous work by Gould. My issue is a first edition of Tusquest, 1430 pages, May 2004. The original English was published in 2002, the same year of his death. He was born in 1941, the same year as me, but cancer attacked him soon. And although he defended himself well he did not go beyond 61.  A shame.

The book is very technical and I think it collects everything important about evolution until this moment. And he exposes his own ideas about punctuated equilibrium. All this with a very specialized language difficult to read for a layman. Dedicates a long chapter (pp. 625 to 776) to: Species as individuals in the hierarchical theory of selection".  I believe that this title already justifies our idea of species as subjects. The entire chapter is interesting because it includes the extensive discussions on individuality in evolutionary biology. I quote only the most significant for our ideas:

On page 629 he collects an article by Ghiselin titled "A radical solution to the problem of the species" Which seems justified and in which he says:

"...many of the classical problems that concern species would be solved at once if we gave up our customary definition of species as classes. (or universal categories that can hold objects) and reconceptualize them as individuals. Each species thus becomes a singular element, an evolutionary entity defined by a unique historical genesis and a particular cohesion in the present moment ".

He says then: " to be called an individual a material entity must have: a discreteor definable beginning, or birth. An equally discreet or definable ending or death. And enough stability to be continuously recognizable throughout its existence as the same thing" Dedicated then several pages to analyze these and other concepts applied to the species, to justify that the species are evolutionary individuals.

Then devotes pages 643 to 674 to "The definition of selective agency and fallacy of the selfish gene" Very interesting. And then dedicates from 675 to 746 to "The logical and empirical foundations of Hierarchical selection theory" Where he deals with evolutionary individuals and the species as such.

For his "hierarchy of selection" distinguishes six levels: genes, cells, organisms, demes, species and clades. Although he says:

"I do not affirm anything about a fixed number of units in the expanded hierarchy of Darwinian action." And later: "...before the inventions of sexual reproduction and multicellularity, neither species nor organisms existed as separate levels, and a fourfold hierarchy reigned (still in force in the dominant world of asexual unicellular organisms): gene, cell, clone and clade."

Analyzes later in detail each of the six levels. The "individual species" is dedicated from page 734 to 743.

He says at the beginning: "As a central proposition of macroevolution, I propose that species interpret the same role of fundamental individuals as organisms in microevolution."  And then confirms the species as interactor individuals refuting the objections that have been raised.

"The classic evolutionary gradualism denies the real existence of the species because they can only be defined as arbitrarily delimited segments of a lineage in continuous anagenesis". (evolution continues without a decisive start). He covers this objection by saying:

"...the species are individualizable under any scheme that describes their origin as a branching event, and not as an anagenetic transformation" And then, faced with the objection of "the absence of a decisive beginning," he also says:

"The affirmation of the fatal fuzziness of the origins of the species contemplates the issue at the scale of a human generation. The vast majority of species, however, arise in a geological time (thousands of years, a very long period compared to our personal lives but... short and defined in relation to the analog organismic appropriate for the origin of new species by branching) "

It also refutes the objections of lack of heritability and that the species are too diffuse or too lacking in internal coherence. And he says that  "...these objections emanate from the inability to conceptualize an alien scale (a mental weakness rooted in our anthropocentric attachment...) "

I have extended myself to these appointments because these objections have also been put on me. And to that I want to add some more considerations related to our work:

I think that although the objectors of Gould were right and the species did not have definite beginnings or endings, or heritability, or were diffuse and without internal coherence, the species have, in each moment, real existence.

To give an example, the species Oryctolagus cuniculus  It exists right now and is made up of all common rabbits or European rabbits that exist in the world. And they are trying to live and reproduce so that their species grows and does not become extinct despite myxomatosis, its many predators and the Australians who consider them a plague. That species and the other two million long species of known species, including Homo sapiens, they now have real existence, although it is not known when or how they started.

The second thing I wanted to add, from my amateur ignorance, is that these debates give the impression that a lot of time and energy is spent on the marginal. What would not be bad, or could even be beneficial, if only it was a waste in time and energy. The serious thing is that the superfluous does not allow to see the important thing. Or that rejects it which is worse. In my experience, the few times I have been able to contrast my ideas with "wise" interlocutors, almost all of them have drawn attention to peripheral issues or formal aspects, which they normally dominate, instead of trying to see the background of the ideas put forward.

I end here the comments to Gould, who still devotes several pages to the species as interactors and to the power of species selection. I think that the annotation reinforces the idea of species as subjects. Although Gould "works" with the species in a more technical and dedicated preferentially to justify his theories.