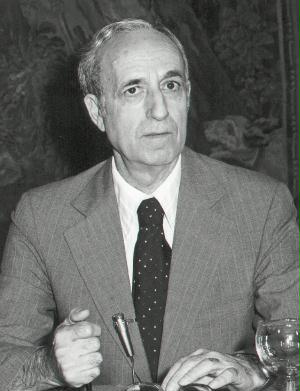 José Ferrater has many merits of all kinds to be included in this short list of Spanish philosophers. And, in addition, I have chosen him because, among those who have searched for the foundations of ethics, I believe that he is one of the most encyclopedic in this matter. And his erudition and opinions are very concentrated in the Introduction of his: "Applied ethics: From abortion to violence", With Priscila Cohn. In Alianza Editorial, second edition, updated in 1988 at 76 his years.

I think that in that Introduction the most significant thing existing at that time is summarized on normative or substantive ethics and metaethics. And on its foundations, variants and applications. I suppose that what is not said there does not exist, at least published at that moment, because if it existed, D. José would had seen it and reviewed it.

For my part, I will comment only on what is most related to metaethics and its foundations. That is, with the aims, objectives, or causes of morality. Ferrater warns that he uses "ethical" and "moral" as synonyms. More or less. For my part, I also agree with him on this issue and on his "integrationist" doctrine. I believe that some philosophers spend too much time on dispensable distinctions and false technical rigorisms. Said from my ignorance of an external user. I go:

The first thing that caught my attention, and that I have already commented in other writings, is the first paragraph of the aforementioned Introduction. He says:

"In a very quoted and debated phrase, the sociobiologist Edward O. Wilson has written: "Both scientists and humanists should consider the possibility that the time has come to take ethics out of the hands of philosophers for a time and biologize it".

Ferrater says that, although ethics has not always been, and exclusively, in the hands of philosophers, they have handled it so much...  "That it does not seem like a bad idea that biologists -At least some of them- take care of it -at least for a while." And adds:

" The animal species called "man" is a product of the biological evolution" And that: "…It can be said that ethical productions are the result of activities carried out by individuals of a biological and biosocial species constituted by physical ingredients".

And defends an anti-anthropocentrism that takes into account an environmentalism that is not only based on the selfishness of the species, since: "...the threats that hover over the Humanity are not the result of a pressure exerted by Nature on the human species, but rather the reverse: the result of a "too humanistic" attitude.

He also says that:"...the time has come to take seriously the idea that the so called "moral problems" are raised in the context of social situations and, of course, bio-social."  I think that he realizes the problem of the philosophers of having as a subject the isolated person-individual. He says later:"This research subject is, in our case, the set of biological, or bio-social, individuals that make the human species up ."

As for the foundation or support of morality quotes Kant and his: "groundwork of practical determination in the principle of morality". And among them those of a material nature: subjective or objective and each of them internal or external. And says:

None of these foundations -which many others could be added- is admissible or sufficient, because they are all, according to Kant "heteronomous": their law is outside and not within them. In reality, there is only one and only support: that of the pure foundation of the will. The autonomous categorical imperative.

He then reviews the attacks against the Kantian Categorical Imperative: From Hegel, Nietzsche, Brentano, Stuart Mill, Scheler, Hartmann. And Philippa Foot that compares moral standards with the rules of etiquette. And to the one that keeps quoting. And to Ronald Dworkin and Robert L. Holmes on the distinctions between norms, rules and principles: categorical and hypothetical. And speaks later:

"...the arguments and counterarguments, the tug-of-war of all the debates concerning "morality": it is a pure obligatory nature, a divine mandate, a moral sense, an a priori intuition but with a content, a system of preferences, a social imperative, a result of the biosocial structure, a prudential attitude, and so many etceteras as they may fit in this book".

Ferrater declares himself more relativist than absolutist and quite utilitarian, even with the difficulties of evaluating what is the greatest good for the greatest number of individuals. He dedicates many pages to the difficulties of applied ethics and seems to be left with a notion of ethics to practice with "moral sense." And with one "indemonstrable basic intuition".  And says that:

"...the aforementioned moral sense is not a gift that comes from heaven: it comes from the earth, from our bio-social constitution, and from the course of our cultural and historical experience. Such a "sense" would be blind without reason, but a pure practical reason without a moral sense rooted in our bio-social and social-cultural reality would be empty." And finishes:

In conclusion, it seems that Ferrater, with his enormous erudition and good will, did not find anyone who had contributed until that time with a common universal ethical principle. He does not find it either. And he proposes to use the "moral sense" in the application of partial ethics, also using reason and "basic intuition". As Hume had already said.